Direct and indirect remuneration (DIR) fees are one of the most controversial topics in the pharmacy industry. Proponents of DIR fees state that they help to promote quality and value among pharmacy operations, while helping to keep premiums low for Medicare beneficiaries. On the other hand, detractors argue that these fees can be confusing and misleading, and ultimately distort prescription drug prices for all parties involved.

A number of pharmacies have experienced difficulties as a result of DIR fees, particularly because of the retroactive nature in which the fees are calculated and collected. Independent pharmacies have taken huge financial hits, arguing that they weren’t able to anticipate the scope of fees.

The debate continues: Are these clawbacks ultimately helpful or harmful to the pharmacy industry and its stakeholders? Will new federal regulations help to ensure transparency and reduce confusion?

What Are DIR Fees?

Originally, DIR fees were created by the Centers for Medicare and Medicaid (CMS) to offset costs paid by Medicare Part D plan sponsors. Over time, the concept has significantly evolved.

Today, the term may refer to a number of fees, such as:

Essentially, these fees allow PBMs to “clawback” millions of dollars based on contracts with pharmacy partners. In some cases, these fees are applied as a flat-rate on prescriptions filled, which may range from $2 to $7 per claim–but has been reported as high as $12. In other cases, a percentage is applied, often at three-to-five percent for brand name drugs.

The Impact on Patients

In addition to impacting the financial bottom line of pharmacies, some experts conclude that the fees may also be harmful to specialty pharmacy patients. The fees may distort drug cost accuracy within Medicare Plan Finder, which is the only public resource for Part D beneficiaries who depend on this information when making critical healthcare decisions. Price misconceptions can also lead to increased out-of-pocket costs that jeopardize adherence and therefore care and outcomes.

Why Are Pharmacies Struggling?

Among the key challenges for pharmacies is that these fees are often charged long after the point-of-sale. For example, first calendar quarter fees may take months to analyze and assess, causing the pharmacy to feel the financial impact in the third quarter. Furthermore, many pharmacies argue that a lack of transparency in contracts, coupled with changes in 2016, lead to an inability to accurately estimate how much they will owe.

The Case of Diplomat Pharmacy

In Q3 2016, Diplomat Pharmacy’s stock plummeted by more than 45 percent. CEO and Chairman Phil Hagerman released a strongly-worded statement asserting that PBMs and their DIR fee applications played a significant role in the company’s financial issues. In his statement, Hagerman cited “little to no transparency on the changes that were implemented in 2016.” As a result, Diplomat and other specialty pharmacies were unable to assess the potential cost magnitude until they received their first 2016 fee statements in Q3. 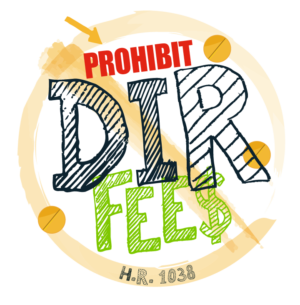 However, the Pharmaceutical Care Management Association (PCMA) is among the critics of the new legislation. PCMA argues that the House bill may ultimately raise premiums and increase taxpayer costs, all while increasing drug store profits. The organization claims that ultimately, DIR fees reduce premiums, which in turn lower federal government costs.

While the debate continues over whether DIR fees are ultimately positive or negative, it’s unclear how the new legislature will perform in Congress and how it may impact the industry if approved. For the time being, specialty pharmacies are encouraged to have a strong understanding of the terms and conditions included in their contracts with PBMs, as well as comprehensive knowledge of pharmacy manuals that may also be incorporated.

The subject matter experts at TherigyConsulting are well versed in the language of DIR fees. Learn more about our consulting team at http://therigy.com/consulting/.